Home » Things to do » Attractions » Temple of Literature

Located at the south of Thang Long citadel, about 2km away from Hoan Kiem Lake, the Temple of Literature (Vietnamese: Văn Miếu – Quốc Tử Giám) is the very first stop-over for any tourist arriving Hanoi in the first time. Let’s visit this historical and cultural relic to discover the first university of Vietnam as well as reveal the Hanoians’ spirit of study in the past.

Founded as a Confucian temple in 1070 by Emperor Ly Thanh Tong, this Văn Miếu complex was dated back to the earliest period, and the Quốc Tử Giám (or National University), was established in 1076 within this temple to educate Vietnam’s mandarin class. It’s proudly that there were up to 2,313 doctors graduated from here during 700 years (1076 ~ 1779) in the past time.

Nowadays, this ancient Confucian sanctuary is now considered as one of Hanoi’s finest historical and cultural sites. The temple is based on Confucius’ birthplace at Qufu in the Chinese province of Shandong. It consists of five courtyards, with three paths that run through the length of the complex. The centre path was reserved for the King only while the left path is for administrative Mandarins and the right path is for military Mandarins.

With total area of 54, 331m2, the Temple complex is featured by the lake, the garden and the interior. Try not to miss the whole 5 parts of the interior as below:

Second part: start form Đại Trung house to pavilion Khuê Văn Các – a unique architectural works and also the symbol of Hanoi history. Khuê Văn Các was built in 1805 with the basement composited by four brick pillars while the upper stairs are in wooden architecture, having round windows in all four directions.

Third part: This is the most interesting part where you would see two houses of steles with 82 steles of doctors set up since 1484 until 1780. In fact, names and hometown of 1304 doctors of 82 examinations were carved on the steles. However, due to the corrosion of time and war, not much of this information can be read clearly on the steles nowadays. They also recorded the mandarins who were tasked with organizing the exams. It used to be common to rub the stone turtles’ heads, but now there is a fence that is meant to prevent people from doing this in order to preserve the turtles. 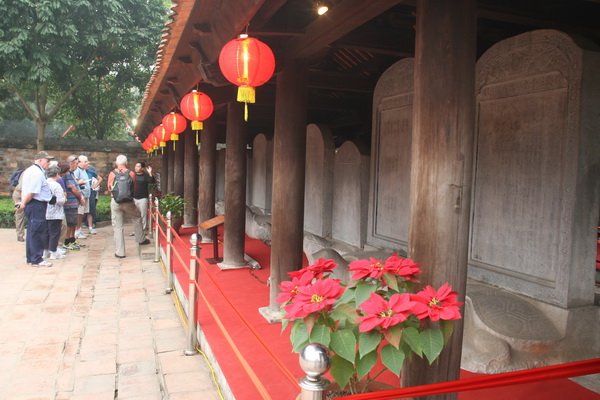 Fourth part: the ceremonial part. On each side of the courtyard stand two halls. Their original purpose was to worship the seventy-two most honored disciples of Confucius and Chu Van An (a rector of the Imperial Academy). In the centre of the fourth courtyard is the House of Ceremonies (Đại Bái Đường). The next building is the Thượng Điện, where Confucius and his four closest disciples Yanhui, Zengshen, Zisi and Mencius are worshipped. The sanctuary also hosts altars to ten honored philosophers. You will find a small museum displays ink wells, pens, books and personal artifacts belonging to some of the students that studied at the temple.

Fifth part: Thái Học zone which was the old Quốc Tử Giám in the past – the first national university of Vietnam. In early 19th century, the Nguyen Dynasty moved Quốc Tử Giám into Hue province and built the Khai Thanh temple there to worship parents of Confucius.

Today, though having gone through lots of restoration work, the temple still retains its very first original shape, to be one of the most visit-worthy sightseeing of Hanoi, captivating to a huge number of tourists elsewhere. Thanks to its peaceful space, green trees and solemnity covers the whole temple of historical and traditional love for study, making tourists feel like they were lost in a land of Confucian and traditional values. If you are in Hanoi, you should really come and explore it yourself!